Captain Marvel is proof that the MCU can carry mediocrity to a top slot.

Vers is an amnesiac Kree warrior who has trouble sleeping due to vivid dreams of her past. She knows nothing of her origins or what happened to her. All she knows is that she is a Kree warrior. And she knows she is ready to take up the fight against the Kree’s hated enemy the shape-shifting Skrulls.

When her first mission does not go as planned, the Skrulls capture Vers and subject her to a machine that delves into her memory. She escapes, but is stranded on Earth with questions about her true identity. She then spends the remainder of the movie searching for those answers.

Captain Marvel Review: How the MCU Can Carry Mediocrity 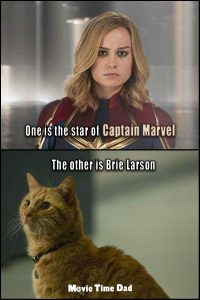 Movie description: A head strong Kree named Vers transforms into Captain Marvel when an unexpected accident forces her into the middle of intergalactic war that could destroy Earth.

Let me start with this: Captain Marvel was not my favorite MCU origin story or movie in general. It was a solid, middle of the road MCU installment probably falling in the top 15 or maybe 10. I have my reasons and will explain below.
By comparison, my 4 year old daughter loves Captain Marvel. It is no understatement to say Captain Marvel is her favorite. She emulates her by play acting a weird hybrid of Captain Marvel and Elsa, and it’s amazing. Weird, but amazing. To paint you a picture, she bounces around the house saying she’s Captain Marvel and pretending to have “frozen” power shooting from her hands.
To clarify, my daughter has also seen nearly every major MCU movie to date (except End Game). She has expressed that she likes Captain America and Spider-Man. And though she has “played” Spider-Man (again with some “frozen powers”), she has never played Captain America. Frankly, I think she mentions Captain America because he’s easy to spot.
And more recently, she has spouted off the line from Age of Ultron, “Can we talk about how the Cap just said ‘watch your language?'” Not sure if I should laugh or worry I’m teaching her the wrong thing here. But she is still the language police in our house, correcting me if I say the “S” word in front of her.
That’s right. Stupid. I can’t say stupid. “Cap doesn’t like that kind of language.” But I digress…
There is something to be said for her attraction to Captain Marvel. Perhaps a primordial level understanding that what she is seeing in Captain Marvel is very much what she can become. In other words, she sees a strong girl, one she can admire, and be like one day.
This is not a new revelation. Social advocates, like Brie Larson herself, have pushed for more female and minority roles in the film industry for this very reason for years. And I’m hopeful, for my daughter’s sake, this is the first of several female super hero movies to come over the next several years.
That said, Captain Marvel has some notable flaws. And these flaws are ultimately what keeps Captain Marvel out of the top 5 MCU movies, if not out of the top 10.
To start, as an origin story, Captain Marvel is largely lacking in establishing a compelling “why I fight” motive – her reason to become a hero.

All the best origin stories in the MCU (and really any superhero movie) establish a compelling reason why the character transforms into a hero. For example, if you watch Iron Man back to back with Captain Marvel, you can see a stark (you may be a nerd if you see the pun there) contrast between the first MCU origin story and the latest installment. Iron Man does an incredible job showing why Tony Stark needs to become Iron Man. His character transforms from a self involved playboy that sells weapons of mass destruction to feeling responsible for his role in the mess of the world’s affairs. He’s still self involved but his self involvement almost drives him to become so consumed with guilt that he must fix it. Throughout it all, he is incredibly likeable because you see his motives so clearly. Also his spot on delivery, timing, and wit don’t hurt there either.  And even in this first installment, the audience gets a glimpse into his character’s overall arc that plays out over the course of several MCU movies.

Excellent sound track that puts you back into the 90’s

Amazing humor based on 90’s nostalgia

Get to see more of Nick Fury’s back story

Captain Marvel’s character and backstory are not well developed

Watch Spider-Man: Far From Home trailer below, the next installment in the MCU. Warning: If you have not seen End Game, don’t watch the trailer.