Over three decades after the defeat of the Galactic Empire at Endor, the First Order threatens the New Republic. Finn, a defected First Order storm trooper, and Rey, a left for dead scavenger on a desert planet, find themselves caught up in the Resistance’s (Rebellion was already taken) struggle to find a droid that will lead them to Jedi Master Luke Skywalker. But before they can find the lost hero, they must take on a planet size battle station that can-

Wait a second – I’ve seen this before. Isn’t this more or less what happened in Star Wars: A New Hope? A rebellion, excuse me, Resistance loses an important droid. The most unlikely of heroes is found on a desert planet. A person dressed as a storm trooper rescues someone from a detention block. Hell, the heroes even recruit a smuggler named Han Solo to get them to the Resistance. A meeting is held to discuss how to deal with a super-duper weapon. And the big base goes boom.

But despite the similarities (I mean, seriously, this is like that meme about a person asking to copy someone else’s homework where the other says, sure, just change some things around so the teacher won’t know… and of course the work is nearly identical), The Force Awakens is not a terrible installment in the newly dubbed Skywalker Saga. But it is by no means the best Star Wars movie ever made. 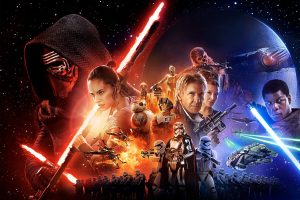 Movie description: Over three decades after the defeat of the Galactic Empire at Endor, the First Order (which probably should be called the Second Order because it came after the Empire) threatens the New Republic of whom audiences know nothing about. Fin, a defected First Order storm trooper, and Rey, a left for dead scavenger on a desert planet, find themselves caught up in the Resistance's (Rebellion was already taken) struggle to find a droid that will lead them to Jedi Master Luke Skywalker.

Director(s): J.J. Abrams (because first names are for losers)

I grew up on the original Star Wars trilogy. I would play pretend that I was on the planet Hoth during snow storms. I created AT-ATs and other Star Wars vehicles out of Legos before those sets ever existed. And about the only thing I would read were Star Wars novels. (Ironic, isn’t it? I didn’t really care for reading as a child or teen, and now I am required to read for what I do. Well, sort of, I still won’t read things that are too long. Or have big words. Meanwhile, my wife thinks she’s hot sh*t cause she reads and writes words on her blog, Seasoned Sprinkles.)

Point is, I have been a Star Wars fan for years. But I’ve also been disappointed in the past with newer Star Wars material. And over time, and a slightly more mature palette, my fandom for the original trilogy has waned some. And the extended, direct cuts of the original trilogy in the late 90s didn’t help. The new scenes added some cringe-worthy elements to the original movies.

And the prequels created two of the worst Star Wars movies in the entire saga (and yes, I’ve seen The Last Jedi.) Seeing Anakin Skywalker as a 10 year old boy with some game really ruined the mystique of Darth Vader set up in the original trilogy. So needless to say, I approached The Force Awakens with cautious optimism for what it could be.

Some of the elements of The Force Awakens felt like the original trilogy in a good way. For example, part of what made the original Star Wars trilogy work was that it was a story with definitive good vs evil. You had the Rebels and the Empire. It was black and white, no shades of grey. And The Force Awakens replicates that sort of feel, which made it feel like Star Wars…

The First Order is an evil regime with a powerful, mysterious figure at the head. There is a wannabe, millennial Vader-like villain. And the rebellion, excuse me, Resistance was there to confront it.

I also enjoyed that the Star Wars universe finally recognized that there are more than 2 or 3 black people and 2 or 3 women in the entire galaxy. Both Rey and Fin played their parts well, and they had pretty good on screen chemistry. And more of the supporting cast, including aliens, were a mix of females and males. And it worked.

Unfortunately, though I didn’t hate it, I didn’t love The Force Awakens either. Among some of my first take aways after seeing it in theaters years ago, was that the movie felt like watching A New Hope reboot. Or worse, it felt like the team at Lucasfilm just took story elements from A New Hope, added in some diversity, took out a few clunky parts, added in additional clunky parts, and added a few new, modern takes on a few scenes and finished by scrambling it around a bit to create The Force Awakens.

A resistance to authoritarian regime? Check. Mysterious bad guys? Check. Unlikely heroes? Check. Outlandishly large space station capable of untold cosmic destructive power with a single, overlooked weakness? Check and done. Pretty much summarizes the check list for both A New Hope and The Force Awakens. And though it worked really well in A New Hope, it fell flat and felt like lazy writing in The Force Awakens.

Had The Force Awakens been the first ever Star Wars movie, it may have had the same effect as A New Hope back in 77. Instead, it felt like J.J. Abrams crossed the line from paying homage to the original to downright copying the work.

Admittedly, some of the other elements I didn’t care for stem from being a fan of both the original trilogy and the original extended universe that Disney scrapped when they took over. To start, The Force Awakens (and its sequel, The Last Jedi) don’t give good closure to the original characters – Han, Luke, and Leia.

We see Han is back to smuggling. Leia is once again leading a resistance. And Luke is somewhere hiding off in space. After 30 years of waiting, their story ends where it begins? There was no happy ending? No changes or growth? And a general feeling of, well, they tried for something bigger, failed, and gave up.

Certainly there must have been dozens of other ways to give decent closure to the original characters while still introducing the new cast. Here’s an idea: why not blend some of the stories from the original extended universe? You know, the stories that fans of Star Wars in the 80s, 90s, and early 2000’s read extensively? Why not give those stories a modern update, where needed, and combine a few story lines like the MCU did? Or better yet, adopt one or more of the story lines to the new trilogy?

Instead, fans get a near carbon copy of A New Hope. Was it terrible? No. But would I sit down to watch it every weekend like I used to with the original trilogy? No.*

(*Disclaimer: Unless it’s Sleeping Beauty, Frozen, Moana, or some other form of Disney princess, I would not be able to even if I wanted to. So this may not be a fair point. Send help though, my daughter has taken control of the TV since Disney Plus came out…)

Also, in fairness to The Force Awakens, my daughter plays along with the movie. She enjoys pretending to be Rey (or possibly Finn because he wields a light saber for some of the movie) and swings her toy light saber around. This scares the living crap out of the dog, who will try to crawl into my wife’s body to escape the five year old with a fake sword.

She also refers to Rey as a “princess.” So my daughter will swing the light saber around wearing her Belle or Sleeping Beauty dress because who says princesses can’t be tough? Certainly my daughter thinks a princess should be able to fight, swing a sword, and terrorize other living creatures. (Send more help for the dog. She’s in danger of being wacked, and dear god those light sabers hurt if they hit you the wrong way.)

diverse cast of male and females, different ethnicity, and so on

had some familiar faces

had some funny parts

too similar to A New Hope

did not pay any tribute to the original extended universe

there were some scene for scene reshoots of A New Hope