Dr. Seuss’ original book and the first animated film, How the Grinch Stole Christmas, tells the story of a green ass-hat who steals every present and scrap of food to teach the Who’s about the evils of consumerism. It was short, sweet, and to the point.

Ron Howard’s live-action version of How the Grinch Stole Christmas expands on the original story, while paying tribute to the source material. Howard’s version adds a richer backstory to the Grinch, Cindy Lou Who, and a few other characters.

Turns out the Mayor of Whoville bullied the hell out of the green ass hat. So he stole Christmas to get revenge. And in the process, he learns the true meaning of Christmas is to spend time with friends and family.

And then, these two films had relations in early 2018. Nine months later, the unwanted bastard child known as Illumination’s The Grinch was born.

If you want to watch crappy Christmas programming, turn on Hallmark’s Christmas in July or their regular programming starting, you know, November 1st or so each year. If you want to see an abomination, turn on The Grinch. (Hell, Princess Sophia has at least two Christmas themed episodes you could check out that are better than this.)

Where do I know that Grinch voice?

Illumination’s The Grinch featured a number of voices. Here are some you may recognize. Then again, maybe not: 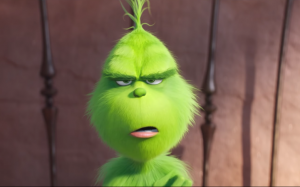 Let’s start with the positives since it won’t take long. It’s short, as feature films go. My 4 year old has watched it twice – once in theaters and once when it first started to stream on Netflix.

OK. That’s about all the good I can say about it.

My biggest complaint, besides this film feeling like the unwanted bastard child of the original story/made for TV movie and the live action Grinch movie, is that the movie is not very cohesive. There is the main plot following how the mildly cranky Grinch sort of builds up towards wanting to steal Christmas. Then there’s the Cindy-Lou Who plot, where she wants to capture Santa Clause to ask him – wait for it – a super important question, which – {shocked gasp here} – is an altruistic wish for her mother. And neither plot has much to do with the other.

It seems like somebody pitched a (possibly lackluster) Christmas story idea to Illumination about a girl living with her single mother around Christmas time. The girl is upset because she sees her mother struggle. So she hatches a plan to have Santa grant her one heart warming wish with all the feels.

And rather than saying “that’s a good idea, let’s expand on it” they said “there’s no way we can sell this… wait! THE GRINCH!” And so they added the touching story as a watered-down subplot to the Grinch’s story to fill in the required run time of a feature film.

The bitch of it is, the Cindy-Lou Who subplot could have added good depth to The Grinch. Instead it felt out of place and as a forced story element to have Cindy-Lou meet the Grinch on Christmas Eve.

Call me old fashioned, but what happened to the idea that she was thirsty and got out of bed for water? Do you know why that works? It’s simple. It’s logical. It didn’t take roughly 45 minutes of movie to delve into the reason Cindy-Lou would be up on Christmas Eve.

In the live-action version of How the Grinch Stole Christmas, Cindy-Lou had a subplot that connected Cindy-Lou to the Grinch. That’s why it worked. She learned about a bullied, misunderstood boy and empathized with him. Her whole goal was to bring everyone, including the Grinch, together for Christmas and restore the true meaning of Christmas.

And her subplot helped drive the Grinch’s own plot and motivation. Ultimately, Cindy-Lou’s actions led to both the Grinch stealing Christmas and eventually learning from his mistake. She drove his character arch in a believable enough way.

In addition to the Grinch, the people of Whoville, in the live-action film, also learned from their mistakes. The live-action version delved deeper into the avarice of Christmas was the original parable. The Grinch largely ignored this concept. The Who’s didn’t learn any lesson about being too greedy, too showy, or too out of touch with “the true meaning of Christmas.” Instead, this idea – central to the source material – is played down significantly and feels more like an after thought.

Then there is the other missed opportunity in Cindy-Lou’s story. She lives with her single mother and twin baby brothers. The boys can’t be more than one year old. The obvious question is: where is her dad? Did he die? Did he walk out on the family? Why not show Cindy-Lou struggling with feelings associated with her absent father? And to connect it back to the Grinch, couldn’t he become a bit of an unwilling, pseudo father figure? Or grow as he watches Cindy-Lou grow and mature as she deals with his loss?

Before you say that’s awfully dark for a kid’s movie, think about Disney. Nearly everyone of their films features the death of at least one parent or family member. Of its feature films, it is harder to list the names of movies that didn’t kill off a main character’s family member within the first 10 minutes or so of the movie. So a dead father or one who walked out on her could have given Cindy-Lou a much more compelling backstory. And one that resonates with a lot of children who have lost a parent either to separation or death.

Instead, we see Cindy-Lou pursuing a lame scheme to capture Santa so she can ask him for a special request in person. <SPOILER ALERT> The request is that Santa do something to make her mother’s life easier and make her happy.

Bitch, please. Instead of running around town all day scheming, if you are that concerned about your mom doing too much work, why not:

It’s not that the request is unreasonable. But given what she could do to help, it seems like the movie itself – a cheap grab at emotions (money).

Then there is the Grinch himself. He is a watered down bad guy. The live-action film showed the Grinch being “evil” to Whos as retribution for being bullied as a kid and being made into an evil urban legend of sorts. Though his actions were comically inept, he did them with malice intent. The current Grinch lacked this malice. Instead, he presented as grumpy and doing “bad” almost as a result of social awkwardness and unplaced pettiness.

Hell, he has a neighbor that calls him a friend and who tries to be kind to the Grinch. And, the Grinch is clearly good to both Max and a random reindeer he adopts. He doesn’t really present as anything other than a sort of awkward, sad guy who needs to accept friendship where he gets it. This is hardly a person who would end up plotting to steal Christmas from everyone in town.

Then there is the stolen plot elements. It is very clear The Grinch borrowed heavily from the live-action film.

Borrowing from other films is certainly not a new concept. Hell, you couldn’t make a Grinch movie without basing it off the plot of the book itself. But something Hollywood often struggles with is doing a remake well. And The Grinch highlights this struggle. And really the question comes down to, what did this Grinch bring to the franchise? The answer seems to be recycled plot and new elements that felt slapped together.

Finally, there is the fact that my 4 year old, who will rewatch almost anything from Sophia the First to Spider-Man: Homecoming, refuses to watch this crap again. This girl literally looks forward to going to her aunt’s house to watch Barbie: A Mermaid Tale that <wink wink> is only available through Netflix at her aunt’s house. I know, weird right?

So if you are in the mood for some Christmas in July or just to get in the Christmas spirit, I’d strongly recommend avoiding The Grinch. Die Hard makes a better Christmas story than this bastardization.

It’s short so the torture only last so long

Appears to be the product of a person pitching a mediocre movie idea and some low level exec saying that won’t work… but if we add “the grinch” maybe it will.