The MCU created a new version of Spider-Man that re-brands and breathes fresh life into his story. Read my full Spider-Man Homecoming review below.

Unless you have spent the last fifty years hiding from pop culture, you know the gist of Spider-Man and his origin. Kid visits a science facility. The only radio-active spider in the whole place chooses Peter Parker to bite. Parker develops super human strength and senses like <SPOILER ALERT> a spider.

Sony Entertainment told this story years ago with Toby Maguire. And while many like his interpretation of Spider-Man, he always felt awkward and uncomfortable in that creepy uncle snuck into school to hit on young girls kind of way.

Tom Holland brings a fresh face and awkwardness to Parker/Spider-Man. Along with that fresh, endearing awkwardness, he also brings a lot of likability and an entertaining relationship with Tony Stark (Iron Man).

Spider-Man Homecoming immediately follows the events of Captain America: Civil War. The story picks up when Parker returns home fresh from helping the Avengers and going toe-to-toe with Captain America.

Parker’s eager to prove himself worthy to Mr. Stark, who is keeping an eye on his heroic development. Unfortunately, super villains don’t just grow on trees, so he is forced to be patient.

But, as luck would have it, a new villain, The Vulture (played by Michael Keaton), emerges to threaten the safety of New York. Spider-Man gets a crash course on how to take on a villain that isn’t going to go easy on him.

Where can you watch Spider-Man: Homecoming?

If you were hoping your Disney+ account would grant you access to all your favorite Marvel movies, you’ll be sadly disappointed. In part because of friction between Disney and Sony studios, but mainly due to the pesky little detail that Sony owns the movie rights to Spider-Man, Disney+ will not have Spider-Man: Homecoming.

If you read Captain Marvel Review: How the MCU Can Carry Mediocrity, you may recall my 4 year old daughter has seen just about every Marvel Cinematic Universe (MCU) installment to date. The quick story behind that is, my wife and I set out to watch every, single MCU movie before the release of End Game. My daughter almost always joined us on these movie nights.

Around Iron Man, literally the first movie we watched, she asked: “Are we going to watch Spider-Man tonight? He’s my favorite.”

Up to this point, the kid has not watched a single MCU movie, read a Spider-Man book, or, at least to our knowledge, even seen a picture of him.

‘Da hell is Spider-Man your favorite kid?’ is what I wanted to say. Instead, I said something to effect of “Not tonight, we’re watching a different super hero movie.”

But those of you with 4 years olds (or once 4 year olds) can almost certainly relate to what happened next. This conversation happened every, single night prior to starting a movie, while we started a movie, and sometimes several minutes into the movie.

What made this even worse? There is something like 18 movies between Iron Man and Spider-Man Homecoming.

And that is not counting the times we weren’t watching a movie at all. “Can we watch Spider-Man?” No, one day you will understand the importance of order. This is for your own good.

About 16 movies later, we took some liberty. We swapped Spider-Man Homecoming with Doctor Strange and a couple others. She won the long game.

We came to learn, a few months later, she knew about Spider-Man from a kid at her school. I’ll call him “Owen” to protect his identity. You’re dead to me Owen. 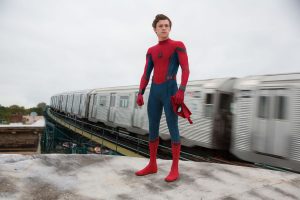 Movie description: Spider-Man returns home after helping the Avengers in their fight against Captain America. Excited by his time as an Avenger, Spider-Man wants to prove he is something more than a friendly neighborhood Spider-Man. He soon gets his chance as a new villain, the Vulture, emerges to threaten the city of New York.

The MCU first introduced their Spider-Man in Captain America: Civil War. His introduction in the ensemble movie helped establish his connection to Tony Stark (Iron Man) and give him his first taste of something much bigger than being a “friendly neighborhood Spider-Man.”

Both of these elements helped drive the plot of Homecoming. So in a sense, his “origin story” in the MCU is contained in about 15 to 20 minutes screen time in Civil War. And the MCU never really shows how he got his powers.

Oddly enough, there is reason for this. And it actually makes some sense.

The real-world reality is Sony Pictures bought the rights to Spider-Man and released a trilogy in the early 2000s. The relatively successful trilogy showed Spider-Man’s well-known start when a radioactive spider bit him. It also established his reason to fight when a thug (that he could have stopped of course) ended up killing his uncle.

Then, Sony rebooted their own Spider-Man with a fresh take several years later with a two film adaptation of Spider-Man. They dropped Toby Maguire (who already looked creepy AF playing a barely graduated young adult) with a new guy to produce a largely forgotten remake and one that did not do as well as the original trilogy in the box office.

Still, the remake featured the same spider bite and the same motive for him to become Spider-Man.

When the MCU gained control of Spider-Man, they decided to take a different approach. Rather than showing (for a third time in two decades) the spider bite and his uncle dying, they took a risk to start further into his story.

And in doing so, they reintroduced Spider-Man for a third time. But with the MCU in charge, they completely rebooted his story.

The MCU replaces an elderly Aunt May with a younger, more attractive Aunt May. There is no mention of Uncle Ben. The spider bite incident occurred in the past and was not apart of his first MCU movie. And though many of his powers are the same, he now needs to have a web shooter and creates his own webbing material in school science class.

In their reboot of Spider-Man, the MCU immediately connected him to the greater universe. After all, his first introduction saw him helping Iron Man and the Avengers.

The MCU also establishes a mentor and unexpected father figure for Spider-Man The movie does an amazing job establishing a believable connection between Stark and Parker. This connection helps drive both Infintity Wars and End Game.

So in not repeating the same, trite story for Spider-Man’s origin, the MCU breathed genuine fresh life back into Spider-Man.

And frankly, that’s a good thing. Maguire was awkward and uncomfortable to watch most of the time. And not in a good way. I sort of wanted to ask the villains in the original trilogy to show me on the doll where Spider-Man hurt them. Creepy.

By comparison, Tom Holland portrayed a nerdy, young, and talkative Spider-Man. He had a taste of being an Avenger, and so for most of the movie, he was desperate to prove himself. He was likeable in an eager puppy sort of way.

Robert Downey Jr. gives another layered performance portraying Tony Stark. He brings a sense of caring to the character while still being funny and engaging. And it is still believable that this is the same Stark that in Iron Man 3 told a young boy who was helping him out, “Dads leave. No need to be such a pussy about it.”

Then there is Michael Keaton. Keaton did a very good job establishing a complicated villain who is mostly believable.

And finally, people who believe any reboot is crap without actually seeing the movie, please note: Reboots happen. There’s no need to be such a pussy about it.

A lot of genuinely funny scenes

Continues to hold family’s attention on a few repeat watching

May have relied a little too much on Tony Stark

Warning: If you have not seen End Game, don’t watch the trailer for Far From Home.