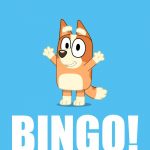 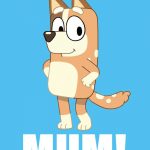 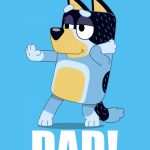 When it comes right down to it, the Australians really know how to make a good TV series. It’s probably why Disney Junior’s Bluey is arguably the best show on the channel at the moment.

What is Bluey about?

Bluey follows the adventures of the titular character and her family. Many of the episodes focus on family, fun, imagination, and dad jokes and dad misbehavior.

My daughter loves Bluey and basically says I am the same as the dog’s dad. In fact, there is an entire episode on teasing that could have easily been written about me. Or really any other good dad out there, of course.

In every episode, Bluey uses her imagination to make up elaborate games that often involve the mum and dad. And most episodes, unlike most Disney Junior shows, are actually somewhat humorous for adults, which is a refreshing change from their soul crushing Mickey Mouse Clubhouse.

What characters are in Bluey?

Literally named Bandit, he is Bluey’s father. He pretty much embodies what it means to be a good dad to young kids. He’s attentive and gives the kids grief in a non-mean way.

But he’s a little too good sometimes, if you know what I mean. If anything, he’s annoying not because he is actually irritating. Rather, he’s annoying because he can dad shame other fathers who don’t interact with their kids the way he does.

Named Chilli for unknown reasons, like Dad, Mum is an attentive and caring mother who spends times with her kids and their imaginations.

She is often the stabilizing force, helping, as wives sometimes do, to keep her husband in check. And like Dad, Mum is shown as a generally good example of what being a good mother to little kids can be like. I’m also told, she can do a bit of mom inadvertent mom shaming.

The titular character, Bluey, likely named after the breed of dog, is a young girl with an active imagination. Unlike some shows that show very gender stereotyped roles for young girls (I’m talking about you, Mickey and the Roadster Racers.), Bluey plays lots of different imaginative games.

True to both a young girl and a Blue Heeler, Bluey is full of energy. Honestly, Mum and Dad a freaking saints in the show with the amount this girls wants to play sometimes.

Not to be confused with Puppy Dog Pals, Bingo in Bluey is, like the rest of the family, mostly tolerable and somewhat enjoyable. Like her sister Bluey, she is full of energy and has an active imagination that leads to several adventures.

Where to watch Bluey

If you live in the United States, you can watch Bluey when it airs on Disney Junior. It’s a currently a pretty popular show, so you can catch it several times a day live on TV.

If you prefer streaming services, you can check out Bluey on platforms such as:*

*I don’t own nor am I responsible for the changes in content to these services. So they might change, in which case, you should write a strongly worded letter to the actual company to complain if you are trying to find Bluey but can’t.

Bluey is probably one of the only Disney Junior shows that I really don’t have any major issues with. As for the rest, may God have mercy on our souls. But Bluey doesn’t make me want to drink before noon, which is a good thing.

I like to say its the Australian way of doing things that makes Bluey good. That and the accents.

But the likely real reason Bluey is good is because the stories are actually relatable to kids and adults. It shows a bit more of a real world response to issues that are not contrived and freaking stupid. It has episodes about using imagination, playing with your kids, setting boundaries, how teasing can be good/bad, and so on.

Compare that to a show like Mickey Mouse Clubhouse. Sure, it teaches some basic problem solving skills, but it’s not nearly as grounded as Bluey in reality. Which, now that I write it, really makes no sense because it is a show about anthropomorphic Blue Heelers. Bluey is wholesome without being saccharine. And your kid won’t shout at the damn screen saying “No Mickey, (you fucking douche, I say in parenthesis) it’s the yellow one.”

Is Bluey a boy or girl?

Glad you asked. Well, truthfully, I don’t really care one way or another.

In any case, Bluey and her sister, Bingo, are girls. It is hard to tell sometimes because:

Is Bluey in America?

Well, technically Bluey lives with her family in Australia. That, or their accents are way off.

But yes, Disney bought the rights or license from the BBC to show Bluey on the Disney Channel, Disney Junior, and Disney+ so fed up parents could watch a show that didn’t make them seethe with rage and self-worth issues every time they had to watch it. So yeah, for a welcome break from T.O.T.S. or other Disney Junior shows that just grate on your last nerve, check out Bluey.

Can you watch Bluey in the UK or Canada?

Thanks to the global domination of Disney’s massive family friendly media conglomerate, you can watch Bluey in both the UK and Canada. So yeah, if you are feeding the Mouse with a monthly subscription to Disney+, you can stream Bluey legally. Of course, if you want to pirate it, that’s your business.

What Common Sense Media has to say

Common Sense Media and I don’t often agree. Bluey marks one of the few times I mostly agree with their assessment. Mostly.

Like me, they give it a pretty good rating of about 4 stars. They also state similar good things about the show, like teaching character development. In fact, they rate them on positive messages and positive role models both at 4 stars.

But they didn’t give them any rating for educational value, which seems wrong. Sure, they aren’t turning to the screen and saying every five seconds “can you count the floating clouds with me?” But they are teaching how kids can get along with others and the value of using their imagination. So many Common Sense Media should use some common sense when rating educational value.

Bluey is (shockingly) a good youth TV series. If you have read or will read any of my other reviews, I often mercilessly pick on Disney Junior offerings. I mean, I can’t help that they all suck so hard.

But Bluey is different. The stories are actually relatable, unlike the many stupid adventures of T.O.T.S. or Mickey and the Roadster Racers, Bluey offers somewhat real world based imaginative play and storylines.

And both the kids and the parents are relatable. Hell, I often am the dad in mannerisms and how he interacts with the kids. The only real negative is that sometimes the dad is a bit too good. He’s hard to keep up with in terms of patience and his willingness to come up with fun games and such.

But really, if you are tired as hell of most of Disney Junior’s offerings, Bluey will be a welcome relief for you.

Both kids and parents are generally relatable.

Does not grate on the nerves nearly as much as pretty much any Disney Junior show.

Parents can almost be too good, which can make you feel pretty inadequate if you can’t keep up with an animated dog parent at times.