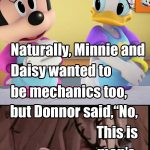 What parents need to know

Mickey and the Roadster Racers is some sort of bizarre follow up on the success of Mickey Mouse Clubhouse. I don’t think it is a direct sequel per se, but it seems to target kids that are between 4 and grown adult based on the positive review I found here.

It features a familiar crew that kids will instantly recognize like Mickey, Minnie, Goofy, Donald, and Daisy Duck. Also included are Chip and Dale, Pete, and a few other familiar faces that kids who watched Clubhouse will likely recognize.

And then there is Cuckoo Loca. A little, somewhat wise-cracking yellow bird that defies the laws of gravity and flight. Anyway, she’s new to the crew and seems to comment on their general stupidity most of the time.

As the name suggests, the Roadster Racers is a show about how Mickey and friends are now race car drivers. They each drive their own “special” car for racing that matches their “personality.”

But the real point of the show (I think) is to teach kids about friendship, relationships, and forgiveness. For good measure, it throws in race cars and racing to entertain the young viewers.

If I’m being honest here, it really teaches kids about gender role stereotypes. Boys are mechanics. Girls are cleaners, babysitters, and fashion-obsessed.

Mickey and the Roadster Racers is one of those shows that you should plan to do something else while its on. You may want to simply leave the room, slowly, so your preschooler won’t notice you are gone until it’s too late.

As with most children shows, don’t expect a cohesive plot throughout the series. Episodes are pretty much their own entities with two absurd segments each with their own plot driving the actions of the irritatingly stupid characters.

The show is set in Hot Dog Hills. Mickey and the men spend a lot of time in the garage where they work on their Roadster Racers.

Each “roadster” is a reflection of the driver. For example, Goofy’s roadster is some bizarre ass shower and tub with wheels. Minnie’s is some pink roadster with a polka dot bow as the spoiler.

As per the norm, Pete is often up to mischief and nonsense that the crew has to fix. And the girls are often off in search of shoes, fashion, and shiny stuff.

Daisy and Minnie form a subplot of sorts. They have their own service called “The Happy Helpers,” which are a glorified maid and babysitting service rolled into one.

Whereas it is great they show the girls being entrepreneurs albeit in very gender stereotyped ways, an important piece of the Happy Helpers’ segment is them picking fashionable outfits for their job in the Fabulous Fashion Turnstyler. Because, you know, you can’t do your work if you are not fashionable! And most of the jobs they do are very much in line with 1950’s idea of a woman’s work – clean, babysit, and do it all in high heels.

Don’t expect to be entertained or enjoy the show. However, your kids will likely love the show much to your dismay.

There are two highlights from Mickey and the Roadster Racers. They are: Donald Duck and Cuckoo Loca.

In most episodes, you get the impression both are smarter than their male or female counterparts. The only difference is how they handle it.

Except in Donald’s defense, his anger at their nonsense is all perfectly warranted. I’d be angry at those ass clowns too. I mean honestly, I’m angry at Disney for creating this garbage that my kid loves so much.

Whereas the famously speech impaired duck gets angry, Cuckoo Loca throws some serious shade at her friends. You always get the impression she has a very low opinion of Minnie and Daisy, which makes watching her much more enjoyable. 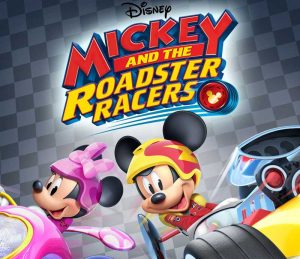 Description: Mickey and the gang are roadster racers in the small town of Hot Dog Hills. Together they need to work through social problems and other adventures in one inane plot after another.

Disney Junior is not exactly known for its high quality television. Sure, there are die hard Disney fans that, if they were to read this, would send me hate mail. But just because it is Disney does not mean it is something everyone will enjoy. And that’s where Mickey and the Roadster Racers comes in.

I am quite sure when Mickey’s gang ends up in Hot Dog Hills, they have officially entered the inner most circle or layer of hell. Gone is any attempt at educational content as tried in Mickey Mouse Clubhouse. It is replaced with vague attempts to teach about community, helping others, friendship, and forgiveness.

It also succeeds quite nicely at displaying stereotypical gender rolls. All the boys are mechanics or mechanically inclined. The girls are fashion inclined and ready to take on baby sitting, cleaning, and other typical woman work.

But there is a catch that makes it that much worse. They need to be fashionable while they do it all. Minnie literally has an outfit picker that picks the perfect, fashionable outfit for her and Daisy to wear.

Nothing is overly offensive, but I do question what it says about what the writers think about young girls…

“What do we know about young girls?

They want to see themselves as babysitters and cleaners when they grow up! Check and DONE!”

I mean, I wasn’t present when this think tank session went down, but I’m pretty sure that’s what happened based on the output of their crap.

But aside from some backward gender issues, it should come as no surprise that Mickey and the Roadster Racers was not written for me, you, or any other parent to enjoy. It is twenty some minutes of pure indulgence for your young children. Pure indulgence that makes you want to pour pure vodka in your coffee as you watch it. Or count the ways you want the characters to die. Or if forced to watch more than one episode count the ways you yourself want to die.

And unlike mainstream Disney and non-Disney movies geared towards kids, there is little to no humor directed towards adults in the audience. Don’t want to pay to see their movies? Fine. They’ll just torture you with mindless dribble that you have to sit and watch with your kid. Unless you can escape the room somehow. Which you can’t. Because Mickey has brainwashed your kid. And your kids will whine at you to watch with them. So you are forced to choice between the torture that is the Roadster Racers or your kids’ nonstop whining. Checkmate, Disney. Checkmate.

And to add insult to the brain damage you will likely suffer watching Mickey and the Roadster Racers, your kids will probably want the accompanying merchandise available at a Target near you. And since you likely use Target runs to break up the insanely long day until your spouse comes home, you’ll probably run into Mickey and the Roadster Racers even in your safe zone.

Mickey doesn’t want you to escape. He now owns your soul.

It is likely a useful modern means of torture.

You might be able to sneak in earbuds for you phone or tablet, vodka in your coffee, or possibly busy work while your child stares blindly at the screen

Donald Duck is likely the only sane one on there (minus Cuckoo Loca) and is only pissy because Mickey and the others never listen to his ideas.

You’re the one being tortured.

Your kids will likely like it quite a bit