The Air Buddies are at it again in this mischievous laden take on a super hero movie. When the events of a comic book turn out to be real, the Air Buddies discover that being super isn’t all about their new found powers.

Super Buddies – Who are the Air Buddies?

The Air Buddies are pretty much terrible stereotypes brought to life. It is actually somewhat amazing, given the backlash at several older Disney films from 40 plus years ago, a movie franchise that started in the early 2000’s would contain these god awful dogs and their companion people.

Perhaps it is because they flew under the radar. After all, all the Air Buddies movies were released straight to DVD. Super Buddies is (thankfully) the last installment of the franchise, coming after Spooky Buddies, Santa Buddies, Space Buddies, Treasure Buddies, Snow Buddies, Air Buddies, and five other Air Bud movies (the Buddies’ dad).

In no particular order, these are the Air Buddies:

Super Buddies may actually qualify for the “So Bad It’s Actually Good” category of films. If you don’t take it too seriously, are intoxicated, or have a terribly sarcastic mind like mine, you might also enjoy sitting through Super Buddies with your child.

But there are somethings you may want to be aware of. These can include:

Believe it or not, Super Buddies actually won an award, well, sort of. According to IMDb, one of the young actors, Darien Provost, won the “Young Artist Award” for his work in Super Buddies.

Darien plays the role of Sam, who is the owner of B-Dawg.

Yeah, I thought it was a joke too. But apparently it is a real award. And yes, Mr. Provost actually won it. I literally have no idea how he won it.

I had to look him up and the role he played to even remember seeing him in the movie. Let’s be honest, the kids could be replaced by any number of the elf extras from The Santa Clause franchise and no one would know the difference.

Maybe it was a slow straight to DVD movie year? Or maybe it is similar to a participation trophy?

Anyway, way to go Darien Provost. You did it. You’re pretty fly, for a white guy…

Where can you watch Super Buddies?

If you are super lucky, you can still use your DVD copy of Super Buddies from when it was first released to DVD. That is, if you still have a working DVD player. Or you could also purchase a DVD copy through Amazon if you really want to. I don’t necessarily recommend that, but you could. Here is the link for added convenience.

If not, your luck won’t be much better. You can watch Super Buddies on Disney Plus. If you don’t have Disney Plus, you can sign up on their website here. You can also learn all kinds of stuff about the Buddies if you visit Disney’s site. This includes short clips and trailers that are sure to confirm your decision that you made the right decision years ago not to purchase Super Buddies.

Super Buddies was on Netflix for a while, but with the introduction of Disney+, you can no longer watch it there.

How many Buddies movies are there?

Let that sink in.

In case you care, the titles include:

What you do with this information is up to you. You could have a puppies marathon, curl up on the couch and just sit back and enjoy the nonsense of it all. Sounds like a fun day ahead. 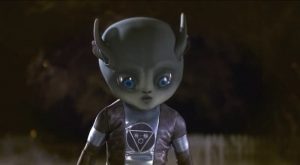 Movie description: The Air Buddies are at it again in this mischievous laden take on a super hero movie. When the events of a comic book turn out to be real, he Super Buddies discover that being super isn't all about their new found powers.

First of all, you can’t start watching Super Buddies with high expectations like you might have when viewing Frozen II for the first time. Super Buddies is not that kind of movie.

Instead, picture a good movie. You have one in mind? Now, take away from that movie all semblance of a cohesive plot and engaging character development and mix in superhero cliches and a dash of stereotypes. That is Super Buddies.

When the alien with the freakishly large head and ears crashes on earth, he takes the form of a dog as a disguise and goes to live with a boy while he “searches” for the rings of Inspiron. But from what I can tell, all they really do while “searching” is write down the tales of the alien with the freakishly large head, which they get published as comic books and gain fame.

Flash forward 20ish years, and who do you think finds the rings of Inspiron? That’s right, the Air Buddies come across the rings in gramp’s barn. And once they find the rings, they each get a different super power that matches their highly stereotyped personality.

Then the alien with the freakishly large head and ears, still disguised as a dog, finds them because they have some ring tracker thing that only works if they are activated. The dog alien then teaches the Buddies about their powers and how to control them.

In the meantime, the green meanie finds out the rings have landed on planet Earth. Along with the cleverly named monkey, Monk-E (he’s a monkey, that’s what makes it clever), the green alien finds gramp’s farm. When he does, he eventually body snatches the ridiculously inept Sheriff’s body and somehow transfer’s his being into a pig.

The buddies train with the dog alien for a little bit, each taking time to sort of learn their power before they face off against the green alien disguised as the sheriff. Despite their lame best attempts to beat the green alien, they eventually realize that the way to beat him is to trick him into taking the plastic versions of the rings given away in cereal boxes that the Buddies’ one owner has collected.

When they trick the green alien, he flies away. And wouldn’t you know it? He crashes right into an asteroid that he had set in motion to hit their town. What bad luck for the green alien.

Along the way, there are some truly cringe worthy moments. In some scenes, I swear the actor or actress had given up on life. A couple of scenes come to mind:

The entirety of the movie makes me wonder why would anyone pay someone to write this garbage? I mean, I write garbage all the time, and no one pays me.

But these writers actually got PAID to write this mess of a cliched superhero story. Complete with lines from the comic book writer guy like “do you think I can make this all up?” Well someone did. And yeah, it sucks.

It’s almost like the whole thing was conceived because of the burgeoning success of the MCU. Disney probably wanted to capitalize on its success with Marvel in the straight to DVD, “family-friendly” superhero genre. And gave us Super Buddies.

Seriously, if you want your child to watch a child friendly superhero movie, try The Incredibles or really any of the MCU movies. My daughter’s seen pretty much all of them, including End Game, and there is nothing wrong with her. You know, after 6 or 7 weeks after she saw End Game, she came around, started talking again. But she got over it. Kids are resilient that way.

But if you don’t want to risk a month and a half of your 5 year old rocking silently in the corner because they saw some MCU movies, The Incredibles are a safe bet for your special snowflake. But if you want a good laugh for all the wrong reasons, Super Buddies is a pretty safe bet. And I imagine your kids will probably enjoy it too.

It’s funny even when it doesn’t mean to be

Bad acting, except for Darien Provost, who won his acting participation trophy for his depiction of B-Dawg’s owner