Once Upon a Time (TV Show) Plot

A young, increasingly irritating boy lives in a small town in Maine. But all is not well in the village of Storybrooke.

Henry is convinced his adopted mother is the Evil Queen from a book of fairy tales. And he believes the Evil Queen trapped all the characters in Storybrooke as part of an elaborate curse to prevent Prince Charming and Snow White from having a happy ending (I’m not making this crap up).

So he does what any normal little boy would do. He goes to find his birth mother who he is convinced is the Savior. So what will the reluctant birth mother/Savior do?

According to Henry, she’ll bring about an end to the curse and help the trapped story book characters return to the Enchanted Forrest… where they will have to give up the conveniences of modern day living. I mean, who wants electricity, running water, or cars anyway?

Is he crazy? Maybe. Annoying? Yes. Or is it crazy how annoying he is? Definitely.

Once Upon a Time (TV Show): Parent Review 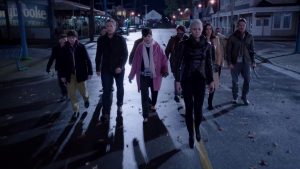 Name: Once Upon a Time

Description: A young, increasingly irritating boy lives in a small town in Maine. But all is not well in the village of Storybrooke. Henry is convinced his adopted mother is the Evil Queen from a book of fairy tales. And he believes the Evil Queen trapped all the characters in Storybrooke as part of an elaborate curse to prevent Prince Charming and Snow White from having a happy ending (I'm not making this crap up).

Once upon a time, I actually enjoyed Once Upon a Time. It was the first show my wife and I collectively binged on Netflix during the winter with our new born daughter. (I also binged The Walking Dead on Saturday’s and Sunday’s by myself, cuz I’m a big boy and could handle the scariness.) And the first season of Once Upon a Time was pretty good as we tried to figure out if Henry was crazy, just plain annoying, both crazy and annoying, or if his adopted mom really was the Evil Queen of legend (who was very, very similar to the Disney version of the character…).

Season two was interesting to see how the characters dealt with the fall out of season one. The show stayed interesting for the first few seasons, at least the first time we saw them. But sadly, Once Upon a Time suffered a similar fate to many other successful shows: it should have quit while it was ahead. As seasons dragged on from 3 to 4 to 5 and beyond, Disney’s obvious influence didn’t even try to hide itself.

The writers began to use blatant copies of Disneyfied heroes and villains. To be clear, the first few seasons showed familiar characters (such as Snow White, Prince Charming, Hansel and Gretel) but mixed up their backstories to make them more intriguing. In later seasons, stories started to become banal. I literally lost count of how many curses the town went through.

In later viewings, we started noticing details that detracted from re-watching the stories. Almost every episode featured the characters walking purposefully through town or lamenting the danger they were in at Granny’s Diner. Really? You’re in immediate mortal danger and you are eating a f*cking pie? #priorities

Then there was the problem that the show kept getting more and more holier than thou. Characters would literally repeat dribble like “Villains don’t get happy endings” and “that’s what hero’s do.”

Admittedly, the first time around, I was invested and wanted to know what was going to happen. Now, over 4 years later when we introduced our daughter to Once Upon a Time, I feel like I’m watching mind numbing nonsense on par with Mickey Mouse Clubhouse.

Still, some characters stayed intriguing. Regina was the shows saving grace. Of all the characters, she had the best development arch and was the most entertaining because she was complicated. Rumple was a close second when he presented a somewhat crazy, mastermind, but even he became bland anytime they took out his quirks. And dear God, when they tried to make him “good” to impress Belle, he became down right hard to watch.

Captain Hook also held his own, again due to his complications as a questionable character. Emma was intriguing at times, but often crossed over into being too one dimensional. But the other hero’s of the show, Snow White, Prince Charming, and Henry were bland, irritating, and boring as f*ck.

And can we talk about how much time they spent just walking through town? The f*cking dwarfs were literally useless except to add fill shots of- you guessed it- walking through town. And if they weren’t trying to reach their 10k step goal, they were almost certainly at the diner discussing the peril they were in.

Meanwhile, I thought to myself, why the hell doesn’t Rumple just end them all with a snap of his fingers? He could have solved almost all his problems if he had just killed them all. But I guess that would have detracted from the story. Maybe.

Then came the final season, literal proof that beating a dead horse creates an unrecognizable pile of disgusting crap you don’t even want on the bottom of your shoes. They literally rebooted their dying show the season following their original casts’ final season. Even keeping audience favorites like Regina, Captain Hook, and Rumple couldn’t keep the show afloat. What I believe they wanted to be an ongoing reboot ended after one season. One season where – shocker – we had to suffer through ANOTHER curse. Once cancelled, the writers rushed to finish character arches and give them adequate endings in time for the season finale.

As if out of spite, my daughter actually liked the show, for a time. She’d ask for it during movie night, even over Spider-Man or Captain Marvel– both movies she really enjoys. But then, something interesting happened. After season 2 or 3, she stopped showing as much interest in the show. It’s as if even a 4 year old can start to identify that the show started to lose its focus, repeat tired story lines, and start to become nonsensical.

Still, the first time around and for the first few seasons, you’ll probably enjoy watching it as a family. Just be warned: after season 3 or so, it starts to go down hill; and the last season is when the show nosedives straight into Hell. You were warned.

Regina, Rumple, and Captain Hook are all interesting characters

First time around, you can get hooked into wanting to know what happens next

Henry is irritating and obnoxious a lot of the time