In Disney’s 1950 animated adaptation of the Grimm’s fairy tale, Cinderella needs the help of her mice friends and her Fairy Godmother to attend the royal ball in hopes of meeting Prince Charming.

Cinderella is literally one of the most famous Disney princesses. To this day, her image appears as a false idol on everything from backpacks and apparel to phone cases and other gadgets.

If I actually cared, I’d probably warn you about certain things that Common Sense Media warns about, such as: 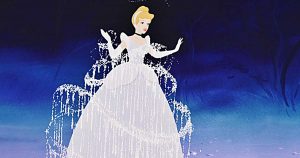 Movie description: In Disney's 1950 animated adaptation of the Grimm's fairy tale, Cinderella needs the help of her mice friends and her Fairy Godmother to attend the royal ball in hopes of meeting Prince Charming.

Cinderella is the Queen Bee of the OG Disney Pincesses, whose ranks also include Snow White and Princess Aurora. She is literally the princess of Disney’s universe. After all, you can’t go to Disney World and stay in Snow White or Sleeping Beauty’s castle, can you? No. It’s Cinderella’s castle. And that’s how she intends it to stay. There is really not much negative I can really say about Cinderella without applying current social and political correctness standards to a film made in 1950. For those of you sensitive to women’s rights issues, Cinderella is really not the movie for you. Cinderella practically defines the damsel in distress that needs a man to rescue her cliche. But, ironically, it is actually somewhat more progressive than Sleeping Beauty, which came out nine years later. Really the worst of the overt anti-feminist dialog comes from the mice when they sing about fixing her dress and leaving the “sewing to the women.” And it is one quick line that comes and goes very quickly. Again, Cinderella came out at a much different time. Hell, if Cinderella came out today, it might be a story about the Prince coming out and wanting to marry his true love… whomever he may be. And the main story would involve the King’s eventual acceptance of his gay son. The 1950’s animated Cinderella is much more enjoyable to me than Snow White or Sleeping Beauty. Snow White has always struck me as quite insipid and shallow. Sleeping Beauty is sort of lack luster, and for most little ones, can be scary. Cinderella, on the other hand, seems a bit more relatable. Maybe it has something to do with the fact she represents a person who is down on her luck. She has people constantly putting her down that she is too nice to throat punch. And she dreams of one day winning the “lottery” (aka meeting her Prince) and riding off in a deluxe carriage with her middle finger waving high and proud out the window at her former oppressors. Ah dreams. Sadly, in the sequels, we see she is nauseatingly nice to everyone. But I guess that teaches good morals for the kids. Whatever happened to good old fashioned revenge? Pretty sure Princess Vanellope von Schweetz in Wreck It Ralph was on to something when she said, “Tut, tut. As your merciful princess, I hereby decree that everyone who was ever mean to me shall be… executed.” Sadly, it did not happen. We did not get to see the stepmother and stepsisters dragged off. Instead, she just marries the prince that she just met, you know, the day before. And she lives happily ever after for about 50 some years before two sequels came along and spoiled her happy ending with a Cinderella II: Dreams Come True and Cinderella III: A Twist in Time. For what it is worth, my wife’s favorite movie growing up was Cinderella. And my daughter sort of likes it. But she honestly seems to be a bigger fan of Sleeping Beauty, Spirit, and Mickey and the Roadster Racers. But if you are looking for a safe bet to watch with your children, Cinderella will likely entertain them. There are no scary monsters. And the only thing you need to explain to them is how unrealistic it is to dream for a prince to save you and have it actually happen. Or you can just let your kid enjoy something without worrying that it will screw them up for the rest of their lives. Don’t worry. As their parent, you will have plenty more opportunities to permanently mess them up.

Decent animation Not a terrible story

Can be boring for young boys, I know because I used to be one If you are looking for a modern feminist piece, this is not it, and there is virtually no way to make it such without drastically changing the story line which you do see in some non-Disney remakes.

Did you like what you read? I can’t say I blame you, I didn’t either. But if you want to check out some more reviews, here are some related reviews you might find just as detestable:

Or you can read about my picks for Worst Family Movie Sequels (Not to spoil the surprise, but this movie may be on the list).