When Disney ran out of ideas in the early 2000’s, it turned to creating sequels no one asked for, like Cinderella II: Dreams Come True. Seriously, 52 years later and execs decided this abysmal trash heap was a good idea? What the hell?

Cinderella II is actually three stories within a story. The main plot, if you can really call it a plot, is that Jaq, the lead mouse that talks funny, and Gus, the, ah, “special” mouse, are late to story time with the Fairy Godmother.

Being a stone cold bitch, she tells them she won’t retell it. But she will, for some reason, help them create a magic story book filled with tales of Cinderella’s early days in the castle as she adjusted to Princess life. Why the Fairy Godmother has time for that nonsense but won’t retell a story she just finished is beyond me.

Anyway, the three stories the mice tell become what I can only loosely describe as the “plots” of the movie.

Story 1: Cinderella and the Etiquette Wench

The first story shows how Cinderella learned to be true to herself when planning a royal ball. She is massively awkward when she tries to plan it in a traditional way. But when she realizes she needs to do it her way, she finds success. Of course, in the process, she sticks it to the uppity etiquette bitch.

The problem with this story is that there is really no tension in her potential “failure.” Really what the hell is the smitten Prince going to do if she failed? And if he had any issues with her party planning, I’m pretty sure some lacy lingerie and a creative imagination would “solve” any issue he might have.

Story 2: Jaq’s not quite the man

The second story taught Jaq a valuable lesson about how he is perfect just the way he is. Like everyone, he has value and a place in the world, flaws and all!

He’s a freaking mouse. Is he really all that important? Most people consider him and his species a pest. Hell, my wife wants me to play executioner at the first hint a furry little friend has invaded our space.

But the best part is that the only reason the Fairy Godmother convinces him to change back from a human to a mouse again is because of her prejudice views of elephants. She says something to the effect of “Aren’t all elephants afraid of mice?”

I’m pretty sure that is a damaging, stereotypical portrayal of elephants, Fairy. You’ll be hearing from the Elephant Union’s lawyers on this insult, Disney. There’ll be hell to pay!

The final story showed that the ugly stepsister, Anastasia, could find true love if she stopped listening to her evil mother’s demands to marry for status. Anastasia is no longer the cruel, vindictive bitch we met in Cinderella. Now that Cinderella is banging the generic looking Prince, Anastasia wants to find true love just like her step sister.

All I can say is Anastasia really has a skewed view of what true love is. And she really shouldn’t be looking to Cinderella for advice on that. I mean is marrying the first guy you meet, who happens to be a rich prince, really true love?

If that happened today, I’m pretty sure Kayne West would warn the Prince to demand a prenup. But he wouldn’t be saying she’s a gold digger… but it is a bit strange Cinderella wasn’t messing with a broke bro.

Anyway, Anastasia meets and falls in love with the village baker. Good on her.

Once the last of the three stories is done, the Fairy Godmother binds them into a book. The mice then give the book of stories to Cinderella who of course “loves” the present.

She definitely doesn’t promptly throw it out when the mice aren’t looking. I’m sure of it. 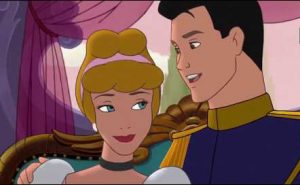 Movie description: When Disney ran out of ideas in the early 2000's, it turned to creating sequels no one asked for, like Cinderella II: Dreams Come True. Seriously, 52 years later and execs decided this abysmal trash heap was a good idea? What the hell?

Cinderella II: Dreams Come True just not for parents. I don’t know who’s dreams they are referring to, but my dreams certainly didn’t come true watching this smoldering dumpster fire.

I didn’t think it was possible for Cinderella to be more insipid. Then I watched Cinderella II, and I realized, I was mistaken. She exhibits an irritating level of  perkiness and optimism. At least in the first movie, you could root for her. You wanted to see her freed from her step family’s imprisonment.

But in the sequel, the same stakes just weren’t there. Like in the first story, oh no! She didn’t do everything in the traditional way. Whatever will she do?

I mean, when a guy marries a woman he just met, it isn’t for her winning personality. I’m pretty sure messing up the ball would not be a deal breaker for the prince. And the king clearly wanted grandchildren, so it’s doubtful he’d want to get rid of his best shot for that. So yeah, the first story just wasn’t drawing me in to the conflict.

The second story proved that even terrible things can get worse (kind of like Mickey and the Roadster Racers proved there were still lower places in hell than Mickey Mouse Clubhouse). Jaq became dissatisfied with being a mouse. So he wished to become a human only to find out that he is not happy as a man either. His only use, apparently, is to scare the crap out of a stampeding elephant because, when the king’s life is in danger, the only logical thing is to stick a mouse in front of it.

Never mind trying to tame it, snare it, or put it down. No. Send in the mouse to scare the damn thing into sumission. Call me crazy, but might a scared elephant become a worse problem? Sorry, I didn’t mean to apply logic to a children’s movie. We all know children are illogical.

Then the third story rolls along. If you aren’t already spacing out or counting the ways you would rather die than continue watching the movie, you will come face to face with the worst of the stories. The insipid Cinderella gives Anastasia advice on love and happiness. The hell does she know about that?

She literally danced with a guy, who’s name she didn’t know, and fell in love with him. That’s not much better than trying to marry a man for his title or wealth… but then she found out he has both those things. And  was it just me, or in the original Cinderella, did she not seem to become that much more interested in him?

If you can make it to the end of this movie, I’m sorry. That was hell.

And if you have the unfortunate luck to have a daughter who likes to watch Cinderella II, you have my sympathy. It will not get better with each watching. In fact, you will likely find yourself hating it and yourself that much more with each subsequent watching.

But there is help and support out there if you look for it. I don’t want any parent to feel like they don’t have a safe space to discuss the emotional void they will likely feel inside after watching this crap.

It is relatively short and if you don’t like one of the stories, it will end quickly enough.

Positive messages, I think, for kids about being yourself and such.

The morals beat the shit out of you. They will figuratively bruise your very soul.

It seems to appeal to young kids.

Watching the movie more than once does not make it any better.

If you liked this review, (and who doesn’t?) check out these similar reviews about other movies your kids will probably subject you to.