Pocahantus: a case study in how history is written by the victors.

Disney’s Pocahontas tells the very Disneyfied version of the Pocahontas story. In Disney’s retelling, Pocahontas is a young woman and daughter of the chief. Either through magic or drugs, she speaks to her ancestors through a old tree.

In a chance encounter, Pocahontas meets Captain John Smith. They fall in love. Then Pocahontas saves his ass. And, oh yeah, she stops a war between the English and the Powhatan (Algonquian in the movie) tribe.

But if you ask for my opinion (which you didn’t), the pecking order of reliability of retelling goes:

That being said, here are some interesting facts pulled from the first two versions of her story:

You can read more of the history here.

Where do I know that voice?

David Ogden Stiers voiced Governor Ratcliffe in Pocahontas. You may also recognize his voice in Beauty and the Beast where he voiced the Narrator and Cogsworth. You may also notice his voice as Jumba in Lilo and Stitch. 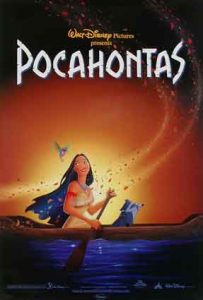 Movie description: A Disney retelling of Pocahontas creates a romance between Captain John Smith and the title character.

Wow Disney, wow. I mean, what was that sh*t?

Let’s start with the grossly inaccurate plot. Not only was Pocahontas too old in the movie, she is portrayed as falling in love with someone she likely viewed as a father figure. That’s some messed up sh*t right there.

The story portrays Pocahontas’ tribe as ready and eager to fend off the (somewhat) evil English. The reality is that they wanted to trade with the English and brought the colonists food when they had none. The relationship began to deteriorate after the English colonists kept demanding more and more food.

And that’s before they kidnapped Pocahontas and forced her to:

Of course, that crap is too dark for Disney. So what did Disney do?

To start, they hired some Native American advisors and actors. Then they added a bit of never really seen before menace to the colonists.

And then they romanticized John Smith and Pocahontas’ relationship and the world around them. Sure, there was some violence. Also, the first governor of Jamestown was clearly the villain. But ultimately the story ended as though all the problems between the English and the Native Americans were over and a new, everlasting peace would ensue.

What? Did they read anything past the names of a few characters? Did Disney not know how American history played out over the next, I don’t know, four hundred years?

I’m a firm believer that fictional, including fantasy works, can and should inspire learning. I can often overlook inaccuracies in films. But I struggled hard with Pocahontas because of just how blatantly inaccurate Disney’s portrayal is. And to further clarify, I’m a pretty big fan of reading alternate history.

But this Pocahontas is not alternate history. It is glossed over crap that makes me cringe.

And I am clearly not alone. For another perspective, you should check out this review Reservations About Films: Disney’s Pocahontas.

Then, there is a small problem of Pocahontas’ attire. She is dressed in a very skimpy dress throughout the movie. It kind of looks like she is out to find a good time. Not only is this grossly historically inaccurate, but I would not want my teenage daughter going out with so little on her body.

Finally, let’s talk about the ancient tree and the wind. If your kid told you they were talking to your ancestors in a tree out back, you’d probably laugh it off. Maybe be a bit freaked out, but mostly laugh it off. And if they said they saw colors in the wind, you’d probably think they were high. As a story element, it is supposed to show how in touch with nature Pocahontas is. What it actually does is makes me wonder what she and her people were smoking.

There is an animal side kick or two, I guess that’s a pro

Plot is not engaging

Pocahontas looks like she is dressed for a good time

Pocahontas may be high most of the movie… if someone said they were talking to a tree and saw colors in the wind, pretty sure you’d label them as high too

How much will you: