In 2007, the world breathed a collective sigh of relief when the Cinderella franchise explored a “twist” in time travel. Yeah, I can’t make that crap up. Someone at Disney actually had the brilliant idea that time travel was the missing element in the Cinderella story.

Sad to say, if you were one the people who wasted your money purchasing Cinderella III: A Twist in Time, you can’t go back and undo it. Thankfully, I am not one of those people. Yay me.

In Cinderella III, we catch up with the ugly and wicked step sisters and stepmother from the original Cinderella as they unhappily toil away doing chores and crap. Somehow, even before the time travel element entered into the picture, the happiness Anastasia found with the baker in Cinderella II: Dreams Come True was erased.

Not that I really care, but what gives? Is Cinderella II not cannon? Did she break up with the baker in a sad tale of betrayal and lust? And if something bad happened, then what about the “Dreams Come True” part? Seems like a pretty crappy way for dreams to come true if Anastasia loses her love.

As I was saying, in the beginning of the third and thankfully final installment of Cinderella’s belabored story, we find the stepsisters and their mother toiling away. Long story with some forgettable details later, Lady Tremaine comes across the Fairy Godmother in the woods as she is undoubtedly practicing her dark magic.

And wouldn’t you know it? She steals the magic wand.

Finally, after 57 some odd years of waiting, we see proof that the Fairy Godmother is truly inept. Not only does Lady Tremaine steal the wand, she can use the wand well enough to precisely send her and her daughters back in time to the exact moment she wanted to go. Not to mention, she uses the wand for at least three more, relatively complicated spells as the movie trudges onward.

For all you Last Jedi haters out there, this is worse than seeing Rey skillfully use a light saber and the force with no training. In fact, it seems damn near impossible, unless, of course, the Fairy Godmother truly is that inept. Which, I don’t put it past her.

Anyway, Lady Tremaine uses the wand again to force the glass slipper to fit Anastasia, which obviously alters the events of the original movie. Cinderella now needs to spend the rest of the movie trying to undo the events that Lady Tremaine set into motion and reclaim her own happily ever after.

There are some twists and turns. Like the Prince is not nearly as daft as he is made out in the original film. He actually recognizes that Anastasia is not the hot chick he wanted to bone from the night before.

And true to her now not cannon appearance in Cinderella II, Anastasia has a change of heart, which is ultimately the only reason Cinderella prevails in the end.

So I guess its not true. The ugly, evil stepsister really isn’t evil after all.

I have to warn you about something in Cinderella III: A Twist in Time that Common Sense Media felt was important to point out. There is some mild violence in the movie. OH NO!

What violence? I’m glad you asked.

Two of the characters get into – brace yourself – a food fight. You better not let any child under the age of 10 watch this horrid violence. I implore you. Think before you let your young child watch such, such barbarity.

Or, you know, don’t let them watch it because you really don’t want to sit through this crap and the threat of watching violence is enough to warrant not letting them watch it. Your choice. 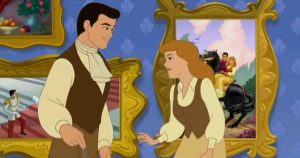 Movie description: In 2007, the world breathed a collective sigh of relief when the Cinderella franchise explored a "twist" in time travel. Yeah, I can't make that crap up. Someone at Disney actually had the brilliant idea that time travel was the missing element in the Cinderella story.

Yup. Time travel. Magical time travel. Cinderella III: A Twist in Time truly out does itself.

Sadly though, this is probably a better tale than Cinderella II: Dreams Come True. However, the only reason it is slightly better is that it was one continuous tale that only sort of beat you over the head with the moral. Cinderella II didn’t stop beating you with the moral even after you were a bleeding shell of the person you were when you first started watching the sequel.

But it does leave a lot of unanswered questions. Like how does the stepmother know how to use the magic wand so well? I mean seriously, she manipulates several events in the movie that keep driving the action forward, such as:

And then it begs the question: why not just use the wand to fully eliminate Cinderella? After all, who is going to save her if she is six feet under? The step family’s happy end would be all but secured then. Or, when her first plan failed, why not go back in time again and create a time loop or pick a different moment to interfere with? As long as she had the wand, why wouldn’t she do this.

Not that what we got to see was exactly a stellar story. It relied heavily on elements that didn’t make much sense and very overdone in film, such as, “we can’t think of anything new to propel the story so… TIME TRAVEL!”

And once again, I find myself seriously questioning my daughter’s taste. She will often request Cinderella III or II over the original Cinderella movie. Not that I cared much for the original, but at least it made some sense. And it is a classic Disney version of a fairy tale.

Cinderella II & III are nothing more than the hot, smoking remains of a dumpster fire that no one put out but instead just fizzled out on their own.

If you can avoid it, don’t let your kids watch Cinderella III. If you do, you might find yourself wishing you could find a magic wand and go back to moments before you agreed to watch the movie with your kids and slap yourself for making such a stupid decision. Trust me, though you may enjoy this garbage for one viewing, by the second or third, you’ll regret every decision in your life up to the point you first allowed your child to watch Cinderella III: A Twist in Time.

It is not too long

It is a *SLIGHT* improvement over Cinderella II

the writers ran out of ideas so… TIME TRAVEL!

Anyone can use a magic wand and even with all the advantages of magic, the stepmother STILL could not win.

You can’t time travel and stop the movie from being made. I’ve tried. I’ve failed.

Did you like what you read? I can’t say I blame you, I didn’t either. But if you want to check out some more reviews, here are some related reviews you might find just as detestable:

Or you can read about my picks for Worst Family Movie Sequels (Not to spoil the surprise, but this movie may be on the list).