In the live action Lady and the Tramp remake of the animated classic, Lady and Tramp get a “modern” update. Though some plot points changed, the ultimate story remained the same.

The addition of a new family member (aka a baby) causes a stir in Lady’s perfect life. When the dog hating sister of Darling takes over temporarily, Lady escapes and winds up falling in love with Tramp, the rebel without a cause.

Live Action Lady and the Tramp 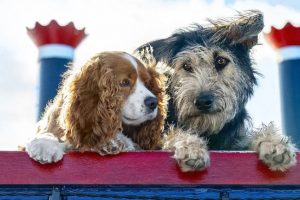 Movie description: n the live action Lady and the Tramp remake of the animated classic, Lady and Tramp get a "modern" update. Though some plot points changed, the ultimate story remained the same.

Probably the best way to summarize the live action remake of Lady and the Tramp is it should be called Lady and the Tramp – The Dogs Have Eyes. Seriously. The CGI’ed eyes and mouth movements are freaky and terribly rendered. Disney does a better job with live action dog eyes in their made for DVD movies Spooky Buddies and Santa Buddies… a first where either of those two films is better than something else. I’m pretty sure either Lady, the Tramp, or any of the creepy ass dogs are going to try to kill me and steal what’s left of my soul.

For example, the movie features a bizarre, largely unnecessary, gender swap with Jock. It really serves no purpose to the story, but for that matter, it doesn’t take away from the story either.

Another change fans of the cartoon version of Lady and the Tramp will notice in the live action version is the removal of the Siamese cats and their stereotyped Oriental song. Twin, male cats replace the missing Siamese pair. They sing their own little ditty that ultimately lands Lady in a muzzle before she escapes to meet up with the Tramp.

Oddly enough, they kept the song “He’s a Tramp,” a mildly suggestive song which Sanctimommies probably can’t have their darlings hear. Because, you know, it will cause their perfect little children to become promiscuous.

Finally, the dog catcher has a much larger role in the live action Lady and the Tramp, giving him a bit more to do… But oddly, the larger role doesn’t add much to his story line, an actual arch, or anything of any real interest.

The iconic spaghetti and meat ball scene is still included, much to the delight of anyone who is a die hard fan of the original cartoon. But I’m sure purest will still find something to gripe about regarding the scene, and the several modern updates given to Lady and the Tramp.

My biggest complaint is the CGI’ed faces and eyes. They still haunt my dreams. And pretty sure they still have a part of my soul. Otherwise, nothing jumped out as particularly terrible… or great for that matter.

If you are a purest and only like the cartoon version of Lady and the Tramp as is, then you probably won’t like the live action one much. If you’re a Sanctimommy, I’m sorry for you and your children. But if you are a normal-ish person, who can appreciate the relative faithfulness to the original while still making some updates to the story, then the live action Lady and the Tramp is well worth a watch.

Modern updates were there, but they did not take away from the story

THE EYES WILL TRY TO STEAL YOUR SOUL

The eyes and facial expressions are terrible

(3.3)
How Dash & Lily demonstrates that 20-something teens ain’t right