Spooky buddies is proof that kids Halloween movies can be scary to adults. I literally dread the day that it may come to Disney+ and my daughter might once again watch this crap on repeat.

To truly understand how terrible Spooky Buddies is, you need to meet the Air Buddies and learn some of their backstory. The Air Buddies are the puppies of Air Bud, a Golden Retriever who starred (I use the word “starred” loosely here) in a moderately successful sports movie about a dog that could play basketball. In later movies (before the Air Buddies became a thing), Air Bud showed his amazing ability to play nearly any sport because, if Disney knows anything, it’s how to milk a beaten dead, male horse dry.

So Air Bud, in his last installment, has some got busy with some bitch (technical term, look it up). And she produces a litter of some bizarre ass stereotypes complete with a token girl character. Guess you could say Air Bud scores one last time. Ah! #dadjoke

Budderball is a stereotypical washed up former high school line backer clinging to his dreams of making it to the NFL as he clings to a chicken wing in one hand and a beer in the other. He’s distinguished from his litter by black lines under his eyes which clearly indicate he’s athletic.

Jokes throughout the movies focus on his eating, weight, and side effects of being overweight… because, you know, only fat people fart.

Mudbud is maybe the only non-stereotyped Buddy. But he does talk in a “far out surfer dude” tone… you know the one… sort of makes him sound high most of the time and minimally intelligent.

I’d say Mudbud represents the dirty crap of the movies he stars in (“Stars” is very, very loosely applied here). He pretty much just rolls around in filth because, I can only assume, his films are dirty piles of steaming excrement and he needs to punish himself.

In that regard, he might be the deepest among the Buddies. Shit, he’s so deep, he very well might represent some sort of metaphor for the whole franchise.

The first truly offensive buddy, Buddha utters classic Buddhism-esque words like “namaste” and “zen” throughout each movie. He pretty much embodies Buddhism and East Asian stereotypes. And, of course, the other Buddies look to him for some bizarre ass spiritual guidance that’s equivalent to living ones life based on fortune cookie sayings.

Ah see what they did there? Rosebud like in Citizen Kane. Of course, all the kids get that reference. And parents like me think its some funny naming right there. So glad they included humor that I, as an adult, can get into…

Seriously though, Rosebud is the token girl in the Buddies franchise. As such, she needs to represent what all little girls do and like: fashion, beauty, and general shallowness.

Of course, I write this as my four year old daughter runs around the kitchen shouting she’s “eagle (evil)” and that she’s putting a hex on us. Other times she’s Captain Marvel and attempts to beat the crap out of me because, of course, I’m Thanos. Proud dad moment right there.

Anyway, if you’re hoping to teach girl power, self respect, and self worth to your daughter, you’d be better off letting your girl watch a Barbie movie over any of the Buddy movies. And shallow as she is, Rarity from My Little Pony demonstrates a well-rounded young lady compared to Rosebud.

As bad as Rosebud and Buddha are, they are nothing compared to the dictionary definition of cultural appropriation or racism that is B-Dawg.

I mean come on. The f*cking dog is named B-Dawg. The voice actor is some white dude. And the stereotyped Buddy speaks in some white-washed interpretation of gangster, hip-hop, and street talk. It’s pretty much the voice acting equivalent of slapping on black face. It’s just racist.

If the Buddies weren’t bad enough, they each live with the human embodiment of their stereotypes:

Spooky Buddies takes place in the fictional small town of Fernfield. Fernfield is a magical town where animals talk to each other and embody human emotions, thoughts, and occupations. The main story is set at Halloween and centers around the haunted mansion of the evil Warwick the Warlock.

Sometime in the late 30s, Warwick the Warlock captured five puppies – from the same litter of course – to sacrifice them to the Howlloween Hound. Without them, he can’t open up some ghost portal.

In the meantime, the townsfolk try to capture Warwick the Warlock, who escapes capture by jumping into a mirror where he is trapped. But, if someone says “Howlloween Hound” three times into a mirror, the dog and warlock will return.

Fast forward to the present day and the buddies and their lil bitch owners are visiting Warwick the Warlock’s mansion. Some punk ass bitches scare the kids. Then B-Dawg cries like a lil bitch a lot. And eventually, B-Dawg utters “Howlloween Hound” three times into a mirror.

And – oh no – the beast and the warlock return to threaten the town again. In the process, they suck the souls out of some dogs, turn people into stone, zombies, rats, and such. It’s actually kinda dark for a kids movie in that regard.

So yeah, the Buddies spend the movie trying to figure out how to beat the Howlloween Hound and Warwick the Warlock. They employ the help a ghost dog, clairvoyant dog, the owner of the dead ghost dog, and Deputy Sniffer.

Not to spoil something I am sure you a looking forward to watching, but as it turns out, Budderball’s ass gas saves the day. And they live happily ever after or some shit like that.

Where can I watch Spooky Buddies’ full movie?

Not sure why you’d really want to watch it, but if you are looking for it, you can find it streaming on HBO or Hulu with HBO access.

According to Disney+’s website, they won’t have Spooky Buddies on their streaming service until September 24, 2121.

You can also rent or buy a digital copy from streaming services such as Amazon Prime or Google Play.

Pip is a sad little victim of the Holloween Hound. After helping the Buddies defeat the hound and Warwick, Pip is reunited with his former owner, Mr. Johnston who was a little boy when he owned Pip. In the end, the pair leave town in search of Pip’s siblings owners, who, like Mr. Johnston, its a miracle they are still even alive.

He is also Disney’s blatant rip off of Casper. Seriously, the dog is literally shaped and colored just like the friendly ghost. 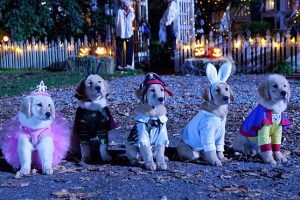 Movie description: The offensively stereotyped Air Buddies are at it again in Spooky Buddies. The Buddies need to protect the town from the evil Howlloween Hound and Warwick the Warlock.

Spooky Buddies is basically a steaming pile of dog excrement. The dogs personify offensive stereotypes. The owners embody their dogs’ personalities. Adults are all morons. And my 4 almost 5 year old is scared of “the purple guy” aka Warwick the Warlock.

Now I’ve let my daughter watch some weird sh*t, like nearly every MCU film. She’s seen Star Wars. And she responds fine to it all. Hell, Captain Marvel and either Spider-Man Homecoming or Far From Home are her favorites. The fact she won’t watch this sh•t again should tell you something.

Hell, it might tell you everything you need to know. It’s that terrible.

If you see this on Netflix or dollar bin at your local store, trust me, its not worth it. There is a reason they are getting rid of it at dirt cheap prices.

And I can tell you, as an adult who just endured watching Spooky Buddies, I’m pretty sure I saw Mickey in the background clutching bags of money cackling at the poor suckers who endured this garbage saying “I own all you bitches!”

One way or another, the Mouse always wins.

Is there nothing you don’t own Mickey? Oh that’s right, the rights to Spider-Man.

It’s short, less than an hour and a half of hell

Buddies are a bunch of stereotyped, obnoxious creatures that make you realize that just because a film features puppies does not mean it will be good

May be traumatizing to your kids or you, I understand the jump scares may frighten some sensitive people out there… and you probably will be traumatized if you simply sit through it