My Little Pony: Friendship is Magic follows the story of Twilight Sparkle and her rag-tag group of unlikely friends living in Ponyville. Twilight is the nerdy, often obnoxious apprentice of Princess Celestia, the ruler of their land of Equestria. (Yeah, I’m not sure what the writers were on when they came up with this… and I’m not quite sure I want to know either.)

Since Twilight is basically a nerdy shut-in who is likely the victim of some severe-ass bullying, Princess Celestia assigns her the task of learning – GASP! – what friendship is. Through many adventures and personal journey’s of self discovery, Twilight and her friends learn that friendship is the most powerful magic of all.

And though it sounds saccharine and like it has the potential to beat you over the head with morals, My Little Pony: Friendship is Magic does a much better job at entertaining adults than Mickey Mouse Clubhouse. And unlike Netflix’s Spirit, My Little Pony has plenty of seasons. It will take a lot of watching before your kid will start to cycle through them.

Strange as it may seem, My Little Pony: Friendship is Magic has a strong male fan base known as Bronies. Yes, a children’s TV show, based on a young girl’s toy, has a rather large group of devoted, adult fans.

In fact, Bronies gather every year at BronyCon. BronyCon allows MLP fans to come together to celebrate their fandom. Much like ComicCon, BronyCon features guest speakers and pony based events and activities.

So what is it that turns grown men (and some women) into fans? Maybe the review will shed some light (Spoiler: it may not). 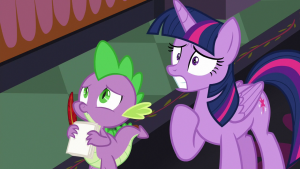 Description: My Little Pony: Friendship is Magic follows the story of Twilight Sparkle and her rag-tag group of unlikely friends living in Ponyville. Twilight is the nerdy, often obnoxious apprentice of Princess Celestia, the ruler of their land of Equestria.

If you’re like me, you probably are approaching My Little Pony: Friendship is Magic with some well earned skepticism. If you have a young children, most of the shows they have likely watched so far are mind-numbing. Like, repeatedly bashing my head against the wall mind numbing. And then there is the fact that, yes, My Little Pony is literally a show created to hawk cheap plastic ponies.

In some ways, Hasbro is a freaking marketing genius. Why stop at commercials? Let’s fabricate an entire children’s series to sell more ponies. Most franchises start with a popular (or not so popular) movie or TV series, and then make toys to market the show or movie. Not Hasbro. Hasbro makes shows and movies to sell their toys. And in some cases, the risk pays off. (Fun Fact: Mattel was the first toy maker to create a TV series based on their toy. Mattel released He-Man toys in 82 and the first show based on a toy in 84.)

My Little Pony: Friendship is Magic does what most successful children’s programming does, it offers some appeal to adults. There are some genuinely funny moments. The plot lines are actually halfway entertaining with a central theme of saving Equestria running through the entire series. And the series develops the main ponies’ characters well, giving them strengths and weaknesses that they have to overcome.

Based on the title alone, it should come as no shock that friendship is the central theme throughout the entire run of the series. The magic of friendship is the most powerful magic in all Equestria, and the ponies use it to save the land at least once or twice a season. To the writers’ credit, they merged the theme decently into action, adventure, and day to day struggles the ponies encounter.

And, they do a better job of incorporating their theme than some shows geared towards adults. For example, by the third or fourth season of Once Upon A Time I rolled my eyes every time they mentioned “heros do this and villians do that.” Seriously WTF? Characters are interesting when they are not one dimensional d-bags that talk about how good they are because they are heroes.

This is something My Little Pony gets right, each of the ponies have their flaws:

The series shows how these ponies need to work together using each other’s strengths to over come their weaknesses. So deep.

Probably the worst part of the show is the representation of male ponies. For starters, there is something like 1 male for every 10 female ponies. How does that work?

And call me crazy, but shouldn’t girls also see what a positive male role model looks like? They by no means should be the focus of the show but showing males that are able to communicate, mentally competent, have their own insecurities and flaws, and so on is beneficial for young girls (and boys) to see as well. But, as complaints go, it is a minor one.

My daughter loves My Little Pony. But, she did go through phases with it. When she was around the age of 2, she would watch My Little Pony primarily for the colorful ponies, some magic, and interesting visuals. Now at the ripe old age of 4, she seems to be getting more into the actual story behind the ponies. She enjoys the show for the adventure it offers, who the characters are, and the magical elements. She will willingly watch My Little Pony as often as we would let her.

If I had to choose between watching Mickey Mouse Clubhouse or My Little Pony, I’d have to go with My Little Pony. Though it would not be my first choice of programming, if my daughter wants to watch it, I don’t feel like I need to develop unhealthy habits to get through it.

A lot of episodes so less repeating

Males are portrayed as mostly inferior

Some cheesy dialogue and themes/morals