A big city girl finds friends and adventure in DreamWorks’ Spirit: Riding Free on Netflix, DVD, and anywhere else they wanted to cash in on this show.

Spirit: Riding Free on Netflix follows the story of Lucky, a big city girl, who meets a wild stallion too headstrong to be broken. She first encounters the stallion while moving to a small train stop town on the frontier called Miradero.

Of course, Lucky witnesses the horse’s capture and <spoiler alert> sets him free. This is only after naming him Spirit. And, <second spoiler alert> of course Spirit chooses to come back to be her horse.

Lucky also meets Pru and Abigail, two local girls adept at riding who will teach her about frontier living and riding horses throughout the first part of the series.

Sure, they think she is a stuck up bitch at first because her grandfather owns the railroad company, but they get over that pretty quickly in the first episode when Lucky saves their lives. Funny how that works.

Over the course of eight seasons, Lucky, Pru, Abigail, Spirit, and some other supporting cast members go on many adventures on the frontier. Some are relatable to young viewers.

For example, Spirit tackles issues such as annoying brothers, mixed family issues, becoming a big sister, dealing with other kids at school, and so on.

Other issues are not as relatable but still fun for young viewers. For instance, at one point, Lucky joins a travelling circus. They also stop bandits and go on a rescue mission or two.

Things to consider when watching Spirit

Where do I know that voice?

Katey Sagal voiced Butch LePray and also starred as Peggy Bundy in Married with Children in the 80’s.

Is Spirit Riding Free on Netflix worth watching? 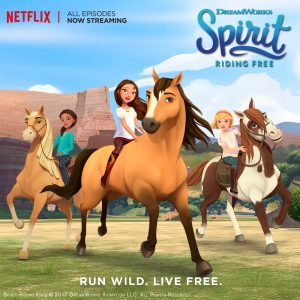 If Mickey Mouse Clubhouse ran for way too long, Spirit: Riding Free did not run for long enough. It had eight seasons (or releases) over the course of two years and now is done.

Do you realize what that means? Constantly. Repeating. Episodes. Compared to longer running series, I have probably seen each episode of Spirit at least 3 times.

Our daughter loves Spirit. She insists on riding on a bouncy horse directly in front of the TV as she watches. She has named the horse Chica Linda, which is Pru’s horse in the show.

Spirit also seems to spur her imagination. She imaginary plays as either Lucky, Pru, or Abigail and drags the bouncy horse around the house.

To their credit, DreamWorks does a pretty good job at making Spirit morally grounded without beating you over the head with morals and themes. It features a combination of girl power moments (all three main protagonists are female) as well as normalizes diversity (one is white, one is African American, and one is mixed race between white and Hispanic). DreamWorks also does not minimize or degrade parent and adult roles as Disney so often does.

Probably the worst part about Spirit is that it runs for only eight seasons. That may seem like a lot, but trust me, it is not. Each season only has 6 or 7 episodes. This means if your child likes to binge watch things they’ll cycle through Spirit quickly. Too quickly.

Otherwise, Spirit: Riding Free is overall a decent show for young kids. You probably won’t hate it too much either.

Spirit: Riding Free holds a child’s attention is tolerable to watch the first few times through

Provides morals without beating you senselessly over the head with them

No annoyingly catchy songs – except the theme song

Good distraction to let you get work done while kid watches

Episodes get old after the second or third time watching them