The Great Christmas Icicle is starting to melt because, you know, these days, kids and their pups are focused on themselves instead of to giving to others less fortunate. Never fear! The terribly stereotyped Air Buddies in their 4th straight to DVD installment will find their Christmas spirit help save Christmas!

Be warned, it is not available on Disney Plus until November 2021, so you will have to either find a streaming service that offers it, rent it, or dig up a copy. Don’t do that unless you are sure you can handle the terribleness.

Disney is not all big budgets and entertaining movies. No. They have an entire line of sub-quality movies that you have to wonder how they ever got approved or budgeted for in the first place. <cough>money grab<cough> Santa Buddies: The Legend of Santa Paws is one of those movies.

Not only is Santa Buddies the 4th Air Buddies installment, it is the 8th movie in the Air Buddy franchise. And it is not even the last since both Spooky Buddies and Treasure Buddies follow this garbage Christmas movie.

But if you want to know the short list of everything you should be concerned about in this movie when you are watching it with you kid, here you go: 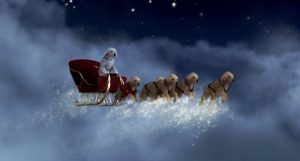 Movie description: The Great Christmas Icicle is starting to melt because, you know, these days, kids and their pups are focused on themselves instead of to giving to others less fortunate. Never fear! The terribly stereotyped Air Buddies in their 4th straight to DVD installment will find their Christmas spirit and help save Christmas!

If memory serves, Santa Buddies is the first movie my daughter binge watched when she was much younger. And I will say, it was, along with Mickey Moue Club House, a large inspiration for starting Movie Time Dad in the first place. It’s flat out terrible from the introduction of the melting Great Christmas icicle to the last scene where some Timmy O’Toole kid with an unknown, yet terrible, illness sings out Silent Night in a pitch that was way to high for him.

We also come to learn, in the first few minutes of Santa Buddies, the driving action of the film: the Great Christmas Icicle is melting at an alarming rate. Thankfully, we learn, through stiff, unimaginative dialogue who’s to blame. That’s right, it’s those little bastards you call your kids who are causing all the problems.

After all, their focus is on themselves instead of to giving to others less fortunate. The little terrors are destroying Christmas! And they’re not alone. Your kids’ pups are also to blame for the melting Great Christmas Icicle.

If you are completely lost, you’re not alone. I’m not sure my daughter ever looked at the movie as anything other than a live action movie that featured doggies. But it just keeps getting worse.

After we learn about the Great Christmas Icicle, we meet the unlovable, playful Puppy Paws, who, wouldn’t you know it, just wants to be a normal pup. So after causing a minor set back and over reacting to his dad’s (Santa Paws’) punishment, Puppy Paws decides that finding the Air Buddies is a great f*cking plan to learn how to be a normal puppy… guess he doesn’t realize that the Buddies are just a bunch of stereotyped douche bags that should be avoided at all costs.

Of course, to get down to where the Air Buddies live, Puppy Paws has to stow away on an elf’s magical mail truck, or what I deemed, the racism express. Prior to starting the journey to pick up letters (which of course the first stop is the Air Buddies home town by some miracle), the elves and Santa run a “systems” check.

The system’s check is more of a “hey, are you still watching this dribble” test. The clearly extensive test transforms the elf and the mail truck (defaulted to a ‘Merica model of course) into a racist depiction of an Indian and Italian mail truck, complete with stereotyped accents and mannerisms for the elf driver. Since the racism is clearly ready to go after two tests, the truck uses the Great Christmas Icicle’s magic to teleport to Fernfield.

It’s truly the moment you have to question what the hell am I actually watching here? I could imagine the backlash if something like that was put in a mainstream Disney movie like Frozen II, which caught flak for it’s portrayal of the native people despite them taking steps to minimize the issue. But since it was straight to DVD 10 years ago, no one gives a shit.

The Buddies are an arrogant lot and creatures you really wouldn’t want to be friends with. It’s little wonder why they only hang out with each other and not even their owners: they’re a bunch of stereotyped pricks. I generally never want a dog or animal to die in a movie, but I’d make an exception for these monstrosities.

When they meet Puppy Paws,  they greet him with skepticism, which, for the first time in the movie, made sense. But they decide to each, individually, give him a chance to hang out and learn how to be a normal pup. Again, this shit oozes irony as you literally think that there is no way these one dimensional characters could ever teach another creature how to be normal. But alas, they do their best until each one gets frustrated with Puppy Paws and sends him to the next Buddy. Ultimately, they all reject him and he runs off for the dog catcher to bring him to the pound.

Santa Buddies has the sad leftovers of what was once Christopher Lloyd as the main villain. He’s the evil dog catcher that – oh no – is doing his job. He locks up Puppy Paws and a poor little dog, aptly, named Tiny (important later in the movie).

How else is he bad? Well,  let’s just say Lloyd doesn’t want to give a break to the down-trodden dad who has a sick boy with an imaginary illness. Turns out, the adoption fee is a couple hundred dollars, which the dad can’t afford. Hopefully the Buddies can touch his heart and make him change his mind. (Spoiler alert- they do.)

And not to further spoil the ending, but guess who delivers all the toys and saves Christmas because Santa is still having trouble getting it up (his sleigh that is) at the end?  That’s right. The Santa Buddies meet a very likely intoxicated Santa (not that I can blame him, if I had to do the movie I’d probably be drinking heavily too). Turns out that though the power of the Great Christmas Icicle is coming back, it’s not enough to power a full size sleigh. So the Buddies need to pull Santa’s sleigh with Puppy Paws at the helm whipping them.

The gift delivery sequence is cringe worthy at best. As they journey across the world, there is a montage to a terrible song that gets stuck in your head for years just like Let It Go from Frozen. They also meet several stereotyped children across the world that fit each Santa Buddy’s personality. It’s awful, but hey, no one but your kids are watching at this point, so rock on.

At the end, they find that the shell of Christopher Lloyd drops off Tiny with the dad with the kid with the imaginary illness. As a reward for doing such a “good job,” Santa gives the Santa Buddies their own genuine Santa hats (again, pretty sure he is drunk AF in this scene, but I can’t prove it). And in the true fashion of a movie that just won’t end, we have to endure a dinner scene with Lloyd and the sick kids family and then endure the “sick” kid singing a pitchy version of Silent Night.

In some ways, Santa Buddies is almost so bad it is actually good. I find some of the characters are actually unintentionally amusing. My daughter still likes the movie at the age of five, but she has moved on to liking Super Buddies, which is even worse in a lot of ways.

So if you are wondering if it is worth finding on a streaming service, digging up a DVD copy, or renting the Santa Buddies, I say be warned, its not. If you have Disney Plus, wait until November 2021. It’s not worth the wait really, but you’re also not missing anything by not paying extra for this crap.

songs are irritating and get stuck in your head

you will have a hard time stay awake during this

a lot of WTF moments